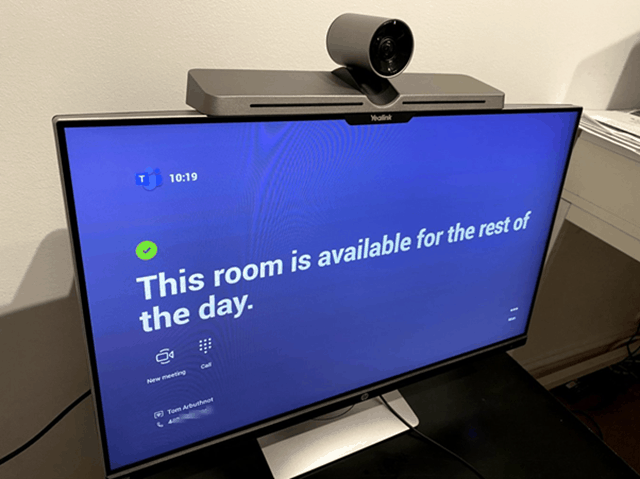 Yealink kindly sent me a VC210 Microsoft Teams collaboration bar to test. Collaboration bars are a brand-new Microsoft certified device category for Microsoft Teams, focused on smaller meeting spaces like focus rooms, huddle spaces, rooms designed for one to five people. These devices are hitting a lower price point, the list price is $1,299.

At the higher end, it might also be considered for the executive home office. They support touch screens, though the VC210 also comes with a remote for non-touch screens.

Collab bars are android based units, rather than the MTR’s windows base. They are Microsoft Teams only with no Skype for Business support.

What’s in the box? 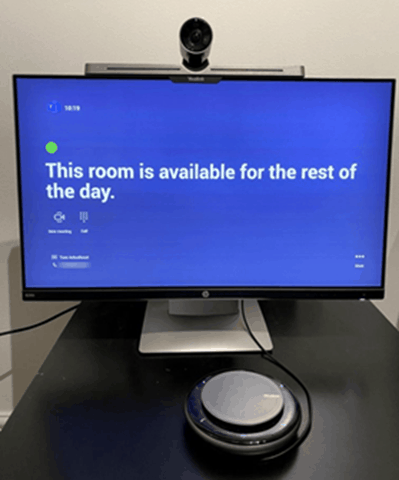 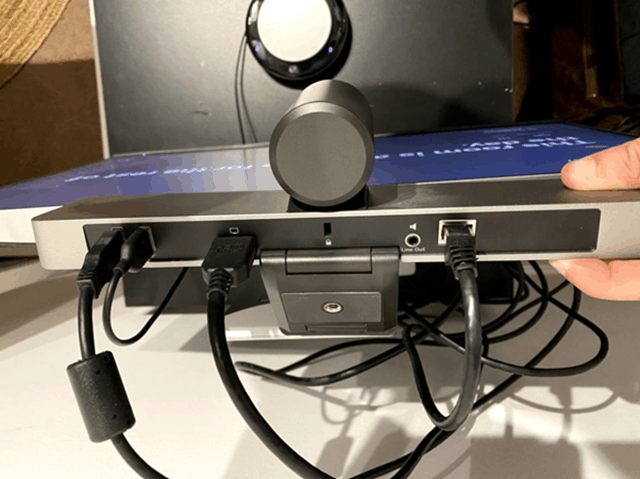 Deployment is straightforward. The unit support PoE, so it was

In a future update, there will be the option of the CP900 speakerphone connecting to the VC210 via Bluetooth, which will open up some more flexible deployment options.

If you don’t have or want PoE, there is a PoE injector/Power adapter, and the unit can use Wi-Fi to connect.

I tested touch with a HP touch screen, and it worked really well. There is also an included remote for non-touch scenarios. It worked ok, but it’s a bit fiddly. It takes some of the usability magic away. It also supports proximity join from the Teams desktop or mobile clients.

The collab bar mounts nicely on the screen with a flexible hinge that also has a tripod thread mount. The camera has a vertical tilt, but not left or right.

Setup was straightforward, with a simple sign-in wizard. All OS and application updates happen from the Teams Admin Center.

I had it plugged in and signed in, in well under 15 minutes.

It has a Kensington lock on the bar, and in the new package of VC210, it includes a security slot box for CP900. So users can’t take away the CP900 from the meeting room.

This is a really neat trick that my friend Randy Chapman pointed out. There is a web interface (default username admin, password 0000) that allows remote configuration but also a live view of the screen and remote control. This is a killer feature for remote support.

Control is via the virtual remote. 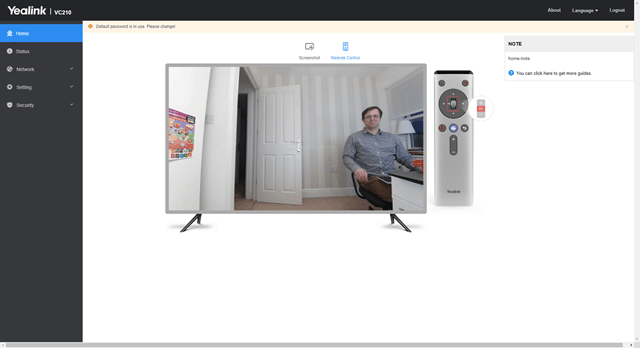 I think this type of device is an excellent addition to the Microsoft Teams device line up. There is lots of interest in enabling the huddle/small meeting room space at a better price point and with simple setup. For the executive home office, where an always-on, dedicated device is required, this could also be a great fit.

Android devices that can be managed entirely from the Teams Admin Center it much easier to remotely manage and patch.

Primarily it’s a “meeting join” device, where you are the attendee rather than the person presenting content. This might change as the software develops in the future.

You can check out more about the VC210 at the Yealink VC210 product page.

Got a question or thoughts? Let me know.

————————————————————–
Have you checked out the new WhichVoIP.co.za website as yet? Benchmark your services against your peers, have a look at what your competitors are doing, get listed in the best Telecoms provider directory in South Africa, and advertise on the site to attract customers to your page where you can view page hits, respond to reviews, load adverts, and more.

Visit WhichVoIP.co.za or jump to a leading comparison section:

Avoxi: Your (Free) Guide to Voice Termination in 2021

COVID Has Little Impact on the Global PBX Market in 2021

Sangoma: The Benefits of Desktop-as-a-Service (DaaS)

Huge Connect: Why Hosted Voice is Important for eCommerce and Online Businesses