There is a specific Webex Calling app for Android, iOS, Mac, Windows Desktop specifically for phone/calling, but users can also use the normal Webex App for calling.

Interestingly there is also a Cisco Webex Calling integration for Microsoft Teams. In this blog I get hands-on so you can understand what it is and isn’t.

A number of UCaaS providers leverage call2teams, a provider who can bridge between the UCaaS providers system/APIs and Microsoft Teams Direct Routing. In this model, the teams user gets a full native PSTN calling experience across all teams clients. To teams, it’s just like any other direct routing setup.

Cisco Webex Calling integration for Teams is quite different. It’s actually a Webex dialler app for Teams, available right in the Teams app store, that “replaces” the Microsoft Calling “app”/feature. The Webex dialer app doesn’t actually manage the audio of the call, all the app is doing is launching the Webex app to make the call, which must also be installed on the machine.

Thanks to VanillaIP, a leading UK cloud comms provider who are also a BroadSoft and Cisco Webex Calling plan partner, who were kind enough to give me a trial Webex account with calling enabled via them for testing.

First I downloaded the normal Webex app from https://www.webex.com/downloads.html and signed in 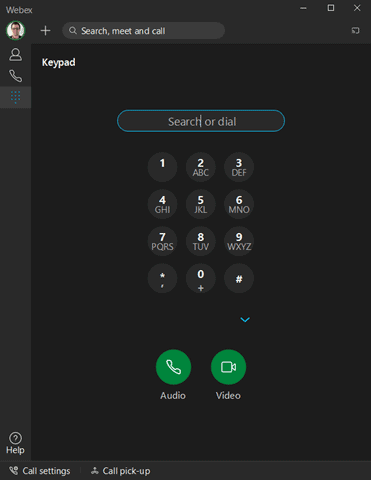 Then in Microsoft Teams, in the Teams app store, I installed “Webex Call” 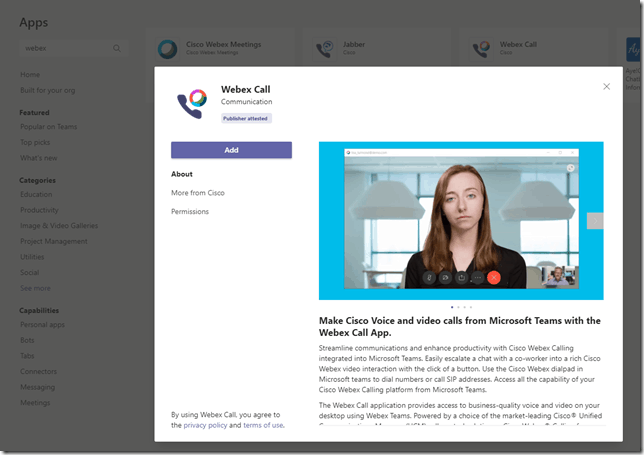 Cisco also have a Jabber call app, which is the same concept but for Jabber on Cisco Unified Communications Manager (their on-premises PBX) 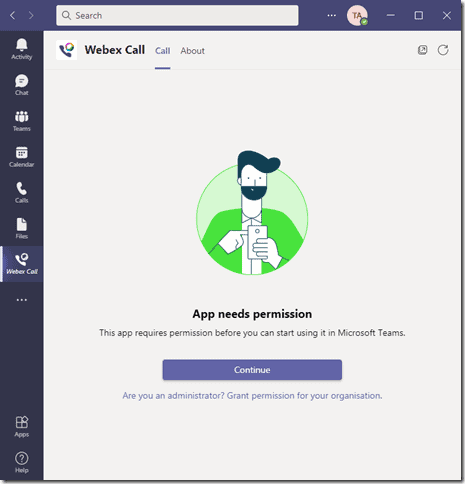 The app required Office 365 administrator approval, which I was surprised by, as everything the Webex Call app is doing seems to be local to the machine. 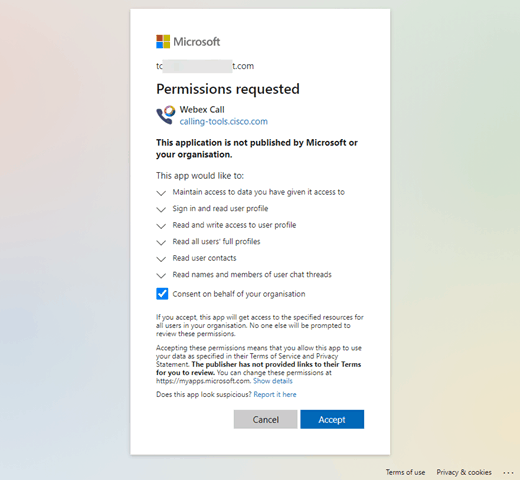 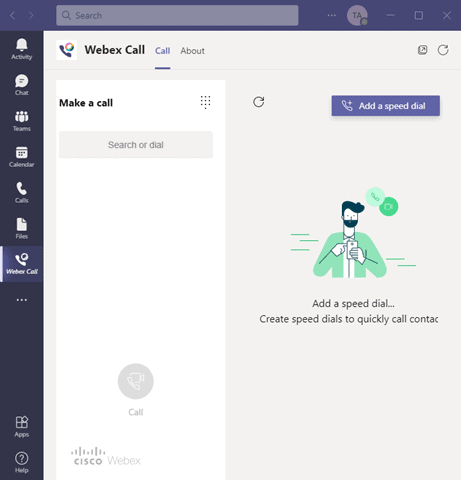 Note, if you were going down this route you might choose to hide/unpin the native Calls “app” on the left rail (though this can also be used for internal Teams VoIP calling, so you might want both). 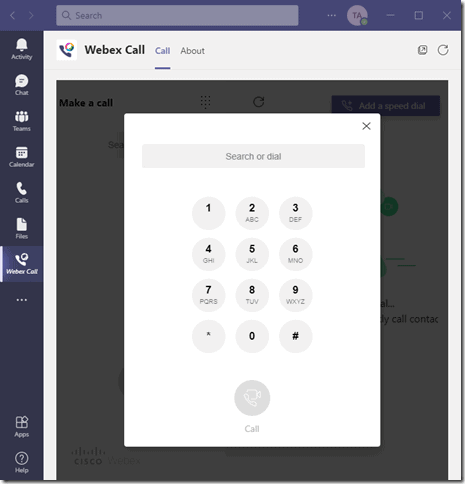 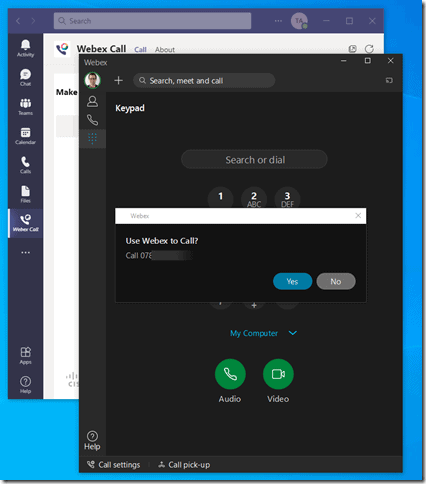 Click Yes and Webex is making the PSTN call 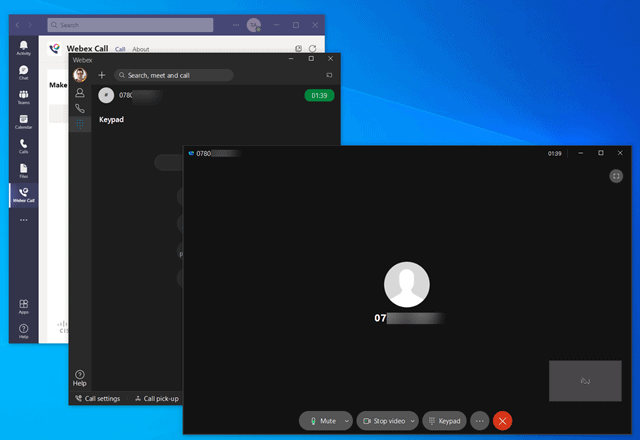 All Call controls are in the Webex client, not Teams or the Webex Call app. Teams has no understanding you are in a Webex PSTN call, your Teams presence will not change to “in a call”. 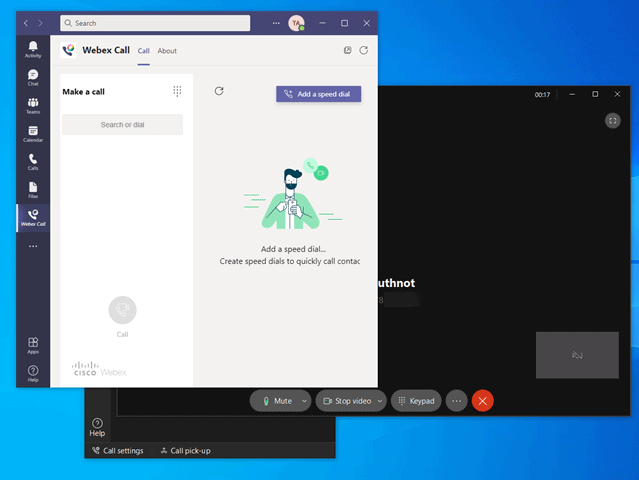 I guess Cisco might make the case that the native Teams phone app also pops a new window for your call.

As you would expect, incoming calls are direct to the Webex client and Teams doesn’t know about them. 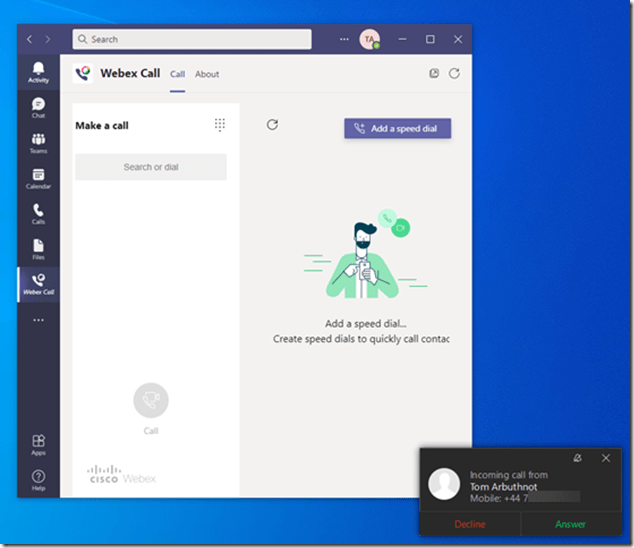 I guess this would work if the email matched another Webex account, or if the contact I was chatting with had a PSTN number listed it would give the option to dial that. 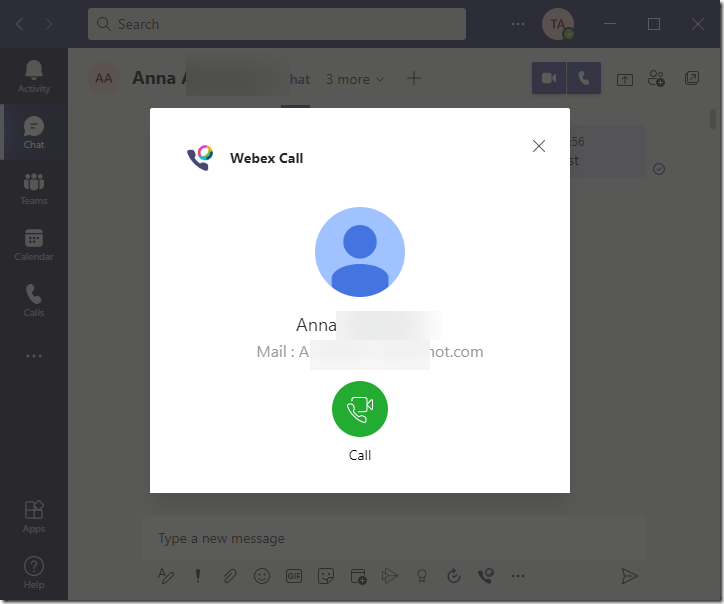 Running it in the Teams Web app actually works too, what the app is doing is just firing a link to webextel:+123123123 and then the browser redirects that to the installed Webex app. Obviously, you need the Webex desktop app installed and signed in on the PC.

On Teams Mobile app, iOS and Android, there is no Webex PSTN dialler/dial pad, but for people you are having a private chat with, you can click the app to again launch the Webex app on the mobile. Note you need Webex installed on the mobile.

Of course, you can install the Webex app on mobile to make and receive PSTN calls too, it just has nothing to do with teams in that case.

Cisco would position the benefits of this approach as being that you don’t need a Microsoft Phone System licence (£6 PUPM list)  and that you can pin the Webex call app on the left rail to let the teams user make phone calls, however, all the app is really doing is firing a link to launch the Webex app.

Webex Calling from VanillaIP is £4.16 per user per month for the base user license with access to all common PBX functionality via the Broadworks soft switch.

I would say, if you are going down the Webex calling route, it would be just as easy to train your users to go to Webex app to make and receive their PSTN calls.